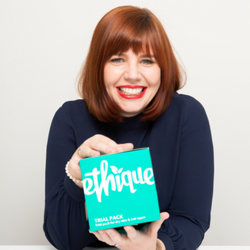 Brianne West is a New Zealand entrepreneur and the founder and CEO of Ethique, a regenerative beauty and lifestyle brand founded in Aotearoa New Zealand. Ethique has, to date, prevented the manufacture and disposal of over 20 million plastic bottles worldwide.

Having previously founded and sold two other companies, Brianne’s passion for environmental conservation, background in cosmetic chemistry and desire to create a business that went beyond just profit led her to establish Ethique with the mission of ridding the world of plastic bottles. Instead, Ethique produces a range of solid beauty bars (not soap), wrapped in compostable cardboard packaging. After almost ten years of trading, Ethique is now distributed in over 22 countries around the globe and is valued in excess of $100 million.

Recognised as one of New Zealand’s most successful social enterprises, Ethique has scaled rapidly without compromising on her core mission of purpose over profit. Every bar is still made using regenerative, certified vegan, cruelty-free and palm oil-free ingredients and wrapped in certified compostable packaging. Ethique is one of New Zealand’s founding BCorps, is living wage certified, climate positive, plants one tree for every order and donates 2% of annual sales to charity. Ethique’s Super Soap Project has donated 50,000 bars of soap since 21st of April 2020 to vulnerable communities across New Zealand and the South Pacific in response to COVID-19.

Brianne’s success with Ethique has seen her awarded as the EY Young Entrepreneur of the Year, Stuff NZ Women of Influence (business enterprise) and be named as an Obama Foundation Leader.

The Power of Purpose