Milk Run: The Future of Non-Dairy

First came soy, then almond, before everything from oat to rice and macadamia nut milk followed. So, in a market where the range of dairy alternatives continues to grow, what’s the next big thing in milk?

Rewind a few decades and when you heard the word “milk”, it typically meant cow’s milk. But ever since soy milk hit Australian shelves sometime in the 1970s, the range of dairy-free milk alternatives has grown, driven by a combination of health, environmental and ethical concerns.

Worth more than $230 million and accounting for eight per cent of all the milk consumed in Australia, plant-based alternatives to dairy are now bought by 40 per cent of households.
And if you think we’ve hit the ceiling in terms of offerings, think again. While soy milk is the most popular plant-based milk in Australia, followed by almond milk, rice milk and coconut milk, it’s a market that’s packed full of innovation, which means new varieties are hitting consumers’ radars all the time.

In the world of plant-based milks, forecasters say it’s newer grain-based milks that will be the ones to watch this year and beyond. The specific grains to keep your eye on? Things like hemp, flax and barley.

Potato milk may also start to make an appearance in plant-based milk aisles this year, at least overseas ones. Made from the humble potato, some trend reports are predicting potato milk will be one of the biggest dairy alternative milk trends of 2022.

One hump or two?

It’s not just plant-based milk alternatives that are having a moment right now, either. Meet camel milk, a type of dairy-free drink that Australia is well placed to produce, thanks in part to the country’s surprisingly large camel population.

A herd that emits less of the greenhouse-gas-causing methane than cows, camels can also graze on more marginal, “poorer” pasture and are significantly less reliant on water resources, too. Plus, some camels used for milk production in Australia, like some of those that contribute to The Camel Milk Co Australia’s offerings, come from the wild, which saves them from being culled, given they’re often considered to be a pest in this country.

And then there’s camel milk’s impressive nutritional credentials. While most plant-based milks fall short of providing the same level of nutrition as cow’s milk, it’s a very different story for camel’s milk. In fact, research published in early 2022 shows it has a nutritional value that’s superior to cow’s milk.

As well as being a good source of calcium, protein and vitamins A, C and E, camel milk also contains something called lactoferrin, which can help to promote the growth of healthy gut bacteria.

Camel milk also contains 25 per cent less lactose than cow’s milk. As a result, research suggests it may even be suitable for people living with lactose intolerance, which is thought to affect up to five per cent of Australians with Caucasian heritage, but as many as three in four Australians who have Asian, African or Middle Eastern heritage.

As demand for alternate milks continues to grow, knowing which products to stock on your shelves can be daunting. This year at Naturally Good exhibition there was a wide range of products on show, including the new kid on the block – The Camel Milk Co Australia.

Subscribe here for regular updates and stay up-to-date with the latest innovations (including Camel Milk) that are changing the natural, organic, and healthy game. 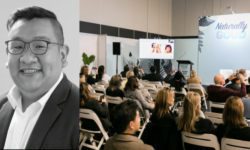